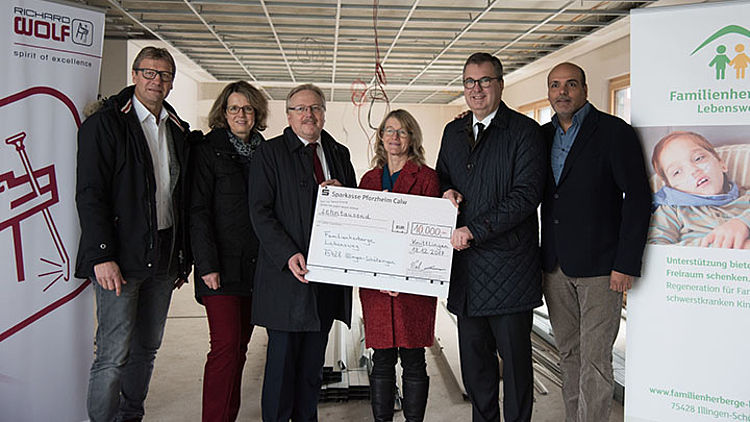 (Knittlingen, Germany, January 10, 2018) On December 18, 2017, the management team of Richard Wolf GmbH presented a donation of EUR 10,000 to Karin Eckstein, the founder of the Familienherberge Lebensweg children's hospice. The check was handed over on the premises of the Familienherberge Lebensweg in Illingen-Schützingen. Stefanie Köppl-Rau, the not-for-profit organization's director of fundraising & finance, as well as official ambassadors – star tenor Jay Alexander and soccer legend Guido Buchwald – were also in attendance. Karin Eckstein could not pass up the opportunity to give Managing Directors Jürgen Pfab and Jürgen Steinbeck a personal guided tour of the rooms, which are currently still under construction, and also spent time telling them all about the further plans.

“Richard Wolf has a long tradition of social commitment. We hope that this donation will provide joy to the poorly children and their parents who will use the hospice,” explained Jürgen Pfab, Managing Director at Richard Wolf GmbH, as he handed over the check. “It gives us great pleasure to support this unique project that benefits seriously ill children in our region,” added Jürgen Steinbeck, Managing Director at Richard Wolf GmbH. 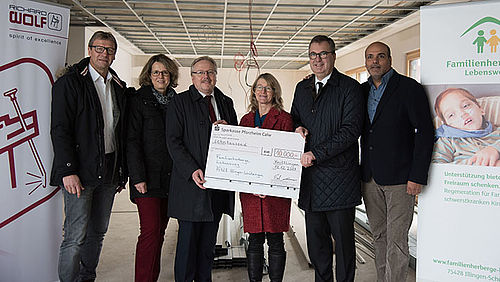